Check out the Video Below — On Criticism Vs. Negativity — for a personalized reading of the following blog.

I get asked all the time, “How do you deal with criticism? Especially when it’s malicious and unkind?”

It took me a while to understand this question. After all, what does it mean to deal with something anyways? Deal implies bargaining. It implies that I have a chance in making someone see things my way. If I compromise in this way, if I change in that way, then maybe, just maybe, you’ll change your mind and like me and what I’m doing.

But when it comes to criticism, dealing is impossible because everyone loves their own opinion far too much.

Then the question gets tricky because I have a beautiful relationship with criticism. Criticism, when it its constructive, when it makes me focus on my craft, when it makes me stretch to be better, is my best friend. I’ve taken many insightful comments from readers and peers and have applied them because criticism is something you should use to make informed decisions about your writing.

You don’t deal with criticism. You work with it.

But then again, what they really want to know cannot be found within the question, “How do you deal with criticism?” 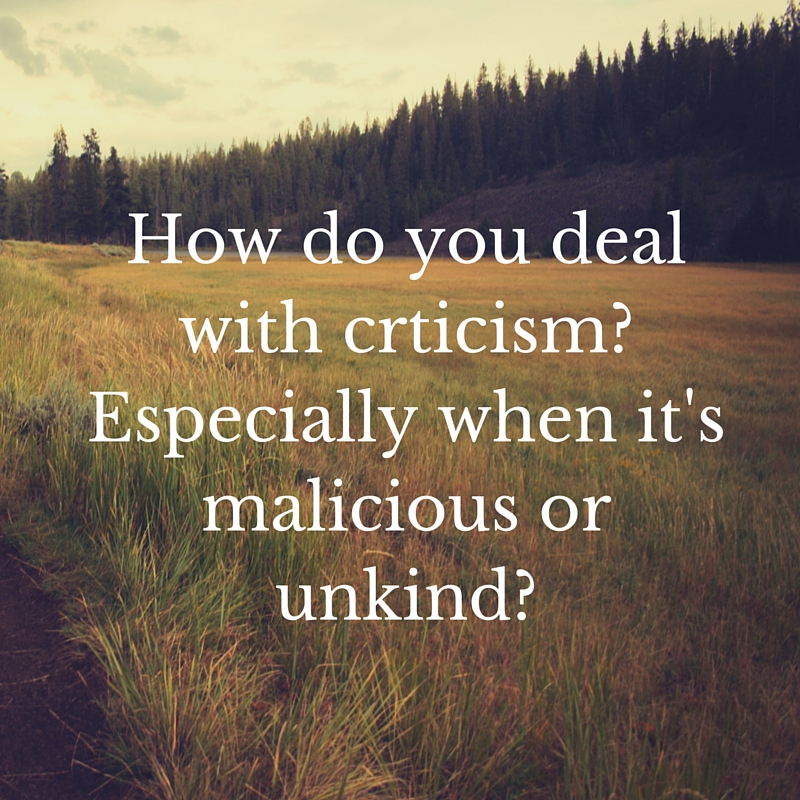 What they really want to know is, “How do you wake up in the morning, hear someone be a jerk-face about what you are doing, and push through to finish it anyways?”

They want to know, “How do you work within the fear that you’re just not good enough? How do you get past the self doubt and put yourself out there day in and day out?”

And most importantly, they want to know, “How do you cope with the pain of negativity?”

For a writer, or anyone who allows themselves to be vulnerable in front of others (whether it’s art, music, sports, or even speaking up in a room full of people), you express yourself in a new and raw way. You’ve cracked open your rib cage and invited people—complete strangers even—to play a game of operation with your heart. And when someone isn’t careful with your openness, it can be startling. You can’t help it. You are human. You want to be loved, and by extension, you want your work to be loved. And when, even just one person, hates it, you take on that hate and apply it to yourself. You feel the jolting sting of every mean letter connecting every mean word to every mean comment, and it vibrates through your entire body.

Imagine… You’re looking out into a sea of stars. You can see it all. The Milky Way, the constellations, all the unnamed watchers of the night. And then you catch the shooting star that streaks across the sky. For just a moment, you forget about the steady constellations and the millions of other bright specks, and you are suspended in wonder over what you’ve just witnessed. You can even close your eyes and see the bright slash burned onto your retinas.

We are constantly terrified of this moment, the moment harsh words streak across our journey into the void. Because the big secret no one wants to admit is that we all exist in this space of fear and self-doubt, and negativity is sustenance for these emptiest of feelings.

Most people cluster in the center of this fear-scape. They find safety in numbers, yet they find misery in the company. There is a contagious sense of not being good enough being passed around like a common cold.

Several will recognize this misery and want to break free from it. They will take a few timid steps out from the pack. It’s not much. Just a step. And they will look out into the void and feel the sublime weight of loneliness in the attempt. They see the people who’ve broken free, floating in the distance, and they want to be where they are, colliding like atoms, creating all that is beautiful in this world. But then they make the mistake of glancing back. There is less distance between the cluster at the center and those out there. There is less danger in returning than in moving forward. They think they will be safer if they just stay put or turn back.

Then there are those few who keep going. Those who hear the whispers of anger behind them. Those who hear all the voices warning them to come back, reminding them that it’s dangerous out there in the land of vulnerability. Timid steps turn into a full on sprint, and they take off. Ah, there are those who hold onto fear, ride it like a bucking bronco, take the beatings that come, and find themselves on the edges of greatness.

And to those at the center, it appears that some hand of god has plucked them up out of fear–like they’ve become helium filled souls as they drift further and further away. It appears that they’ve escaped the realm of fear, but the secret is still that the fear never goes away. Ever. Because the moment we encounter the definition of fear as a child, we are all trapped in its gravitational pull, and it is a life long battle to pull away from its control.

Once you choose to fight it, there are many types of people left in the center, but, for the sake of brevity, I’ll only mention a few.

There are those who cheer you on when you take off running into the void—happy for you even when they think you are bat-shit-crazy. They are kind because perhaps they’ve been on the journey before. Perhaps they’ve escaped once upon a time, but something tugged them back in. Whatever the reason, they feel empathy for your plight, and they are excited for what lies ahead for you if you just keep going.

There are those who might take your escape as inspiration to try themselves—who are reminded that they have things in this world they were meant to do, and they start playing hokey pokey with an escape plan. One foot in, one foot out, wondering if they should take the plunge. In your attempt to flea, they find permission to try themselves, and these are the people who might not be far behind you.

Then there are those stewing in their own bitter inadequacies. These are the spewers of words, the weavers of meanness, the critical spawners of negativity. They notice you floating away and jealousy blooms. They see you doing things they wish they had been brave enough to do themselves, and when they witness bravery in others, they are reminded of the cowardice within themselves. So they lash out and try to pull you back in. After all, if they can shut you down, you will no longer be a reminder of what they were unable to become. Since they choose not to rise above the fray themselves, they let their words. They target them at you, hoping to tether you back to the center of fear. Word by word they layer their own self-doubts on top of yours hoping that the weight will become too heavy, and they have become fear’s gravitational pull, adding to an already horrifying struggle.

And anyone who opens them selves up to vulnerability within the kingdom of fear will feel the sting of these words when they hit. Especially when it comes from unexpected places—like from the people you thought were for sure in your corner.

These words will burn bright. They will slash across your vision, and you will see them stained against the back of your eyelids when you blink. They will tell you you’re not good enough–that you should just quit now before it gets worse, and whether you believe them or not goes back to what kind of stargazer you are.

Because there are two kinds of stargazers in this world.

The first breed sees shooting stars but doe not let them control their focus. They recognize shooting stars to merely be part of the wonder when looking at the heavens—that they are ephemeral, passing, and inconsistent. Rather than spend their time focusing on something that may or may not reoccur, these stargazers appreciate what is left behind. They find the stories in the stars that pulse steadily, and there is something less frantic in this venture.

The second breed of stargazer, after seeing a shooting star, will keep their eyes peeled for them—those beautiful, bright inconsistencies. They will become distracted by the promise of the bright stars zip-lining across the night like they are important and have important places to go. These stargazers can’t even escape the thought of them because they still see remnants of light every time they close their eyes. There is something painful to this, a frantic strain of the pupils, and their entire evening becomes taken up in the task so that they forget there was even a sky at all.

If you’re the kind who sees one shooting star and becomes obsessed with finding more, you will find them sure enough. It will be as if one shooting star begets the next. They will streak, and streak, and streak night after night. And if they are the only stars you look for, then they will become the only stars you see. Eventually, you will forget about the other kinds of people who are cheering you on, who are inspired, who want you to keep going, and you will return back to the center of fear embarrassed at your failed attempt to try.

Or are you of the other breed.

Do you see the sky for the stars? Do you feel the steadiness in the open weight of the heavens, star after star, constant in the sky? Do you feel the beauty in remaining vulnerable even as people lash out at you?

Which brings me back to the bigger question. How do I cope with negativity? Quite frankly, with empathy. I recognize that their fear has nothing to do with my own. That their fears are just that…theirs. And if I try to take on their self-doubts on top of the ones I’m already battling with inside of myself, then I’ll never get to the outer edges where all the great stuff happens. 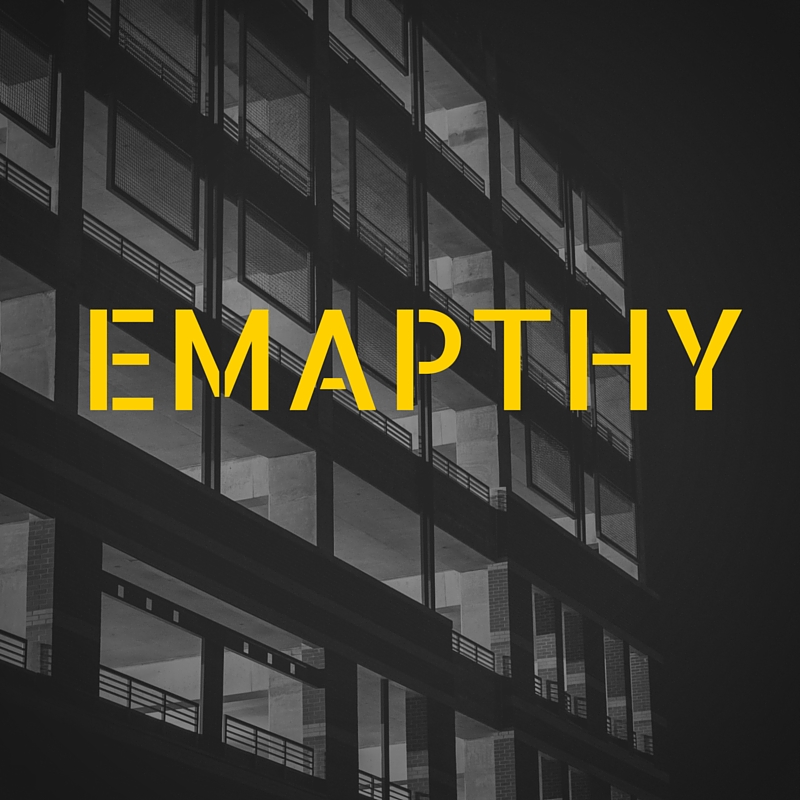 You see, there is no dealing or bargaining with these people. There is nothing I can say or do to change their mind. They will hate what I do and be terribly vocal about it because that is their right. Still, every time it happens, I want to defend myself. I want to convince them that I’m good enough, but I know, should I even engage in this act of bargaining, it will be the pathway back to the center of fear. I’ll get trapped in the cycle of compromise that is impossible to win, and I’ll forget what I’ve set out to do. So I remind myself that even when negative words hurt—because I won’t pretend they don’t—I do nothing but validate them when I give them a reaction.

This is where the empathy comes in. The best way I’ve learned to cope with negativity is to let the speakers of it own their words without debate because it comforts them far more than it hurts me, and they need negativity far more than I do.

Because I’ve got my mind set on riding fear all the way to the edges of greatness, and I don’t have time to engage with those still trapped at the center of self-doubt. And if you’re playing hokey pokey with an escape plan to put yourself out into the void of vulnerability, neither do you. 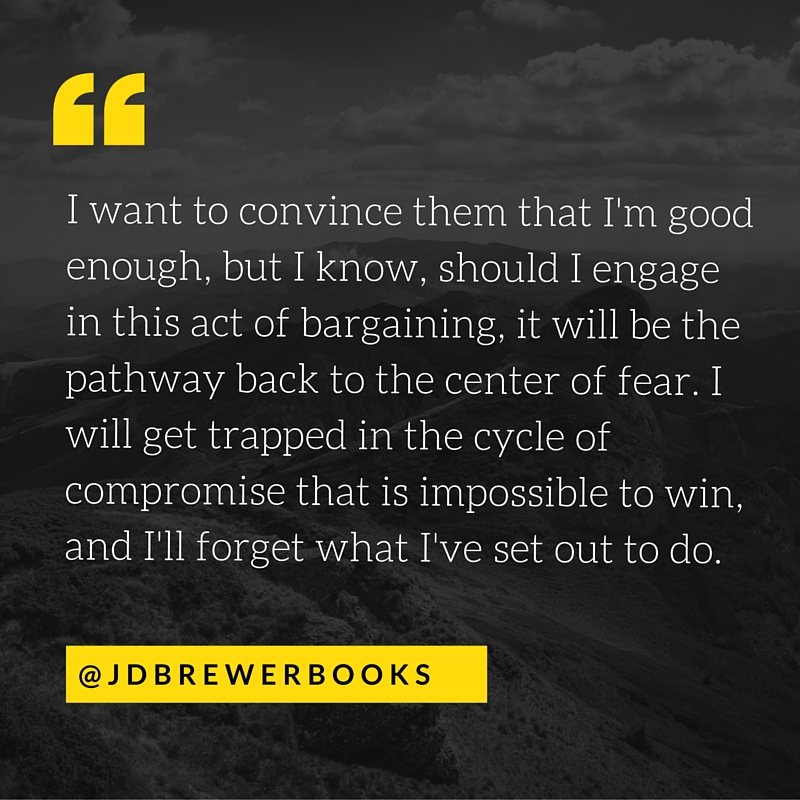