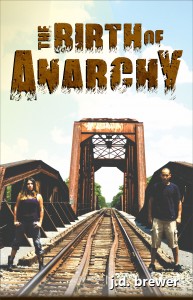 That’s right folks! The Birth of Anarchy launched this month without a hitch! It is officially available on Amazon!

For those of you who are visual, check out The Birth of Anarchy’s Book Trailer, featuring music by singer-songwriter, Carrie Williams! She is super talented if you un-mute the button on YouTube!

Also, as a special treat and at the request of one of my amazing readers, I’ve read the first three paragraphs of The Birth of Anarchy out loud under a Christmas tree!

The Birth of Anarchy is Vagabond’s Sequel. Below is a little bit more information if you are curious!

“The past is just as unwritten as the future, for both places in time hold unborn stories, and the only moment you can truly trust exists between the here and now.” Anicetus Petrakis grew up searching for unborn stories—those stories lost in the crevices of time and the shifting perspectives of those who wrote and rewrote the Republic’s history. Groomed to follow the family tradition of politics, he was taught to navigate a world manipulated by half-facts and missing-truths. His future appeared to have a set course until he learns about the Unnamed, a Terrorist organization within the Rebels on the Tracks, threatening to create Transgenic abominations that will contaminate the Human Genome. At the request of his grandfather, Anicetus plants himself in the midst of the Rebels under the guise of garnering peace between the Citizens of the Republic and the Vagabonds of the Tracks. Hucksley, an incorrigible Track-girl takes on the task of guiding him through this new path, but can Anicetus outmaneuver her ploys in order to root out Lynk, the greatest Genetic Terrorist the Republic has ever seen? Can he race time, a past he cannot understand, and a future that threatens to redefine Humanity as the Republic has always known it? Or will his failure mean the end of the world? The Birth of Anarchy is an action packed, philosophy driven follow up to J.D. Brewer’s debut novel, Vagabond. Set nineteen years after Vagabond, in a story that maneuvers between the present and the past, readers will find themselves questioning what it truly means to be human in the shadow of Humanity.