When I’m in the thick of writing, I laughingly tell my friends, “I love you, but it’s time to hang out with my imaginary friends.” It’s like our secret code to let them know I’m not being a total jerk-face when I turn down hanging out to write.

Although it’s a joke, the heart of it has some bite. Imaginary friends? What am I— like 6 years old— trapped in my own version of Drop Dead Fred? But in a way, we all do this. When we’re lost in reading a book, characters become real in the imagination. The heart of every great and epic story is in the characters and whether or not readers care for them, and this caring is what brings them to “life.” Growing up as a book obsessed girl, I always felt this way. The characters in my favorite books taught me just as much as the characters in my own life saga, and, in some corny/awkward way, they became my friends.

But as an author, there is a different level of responsibility to this relationship.There has to be more care taken in how a character is approached, because, like all parents, I have the potential to really screw someone up. The development of a character is very similar to the development of a person. They have personalities, fears, hopes, and dreams, and one wrong move on my part can really stunt their growth— and my story.

Most people do not realize this, but Vagabond was not the first novel I finished. The first novel I finished was Intrepid, and it has been sitting and simmering all summer long. I wrote Vagabond because after I finished Intrepid my fingers didn’t want to stop typing. So… Why didn’t I put out Intrepid first? Because there were some darlings I had to kill, and it broke my heart. The truth is, Vagabond was easier to clean up in the editing process.

You know that feeling you get when there is a big, crazy, loud family you meet for the first time? You’re, lets say, invited for dinner at your new boyfriend’s house, and his family looks like they’ve collected stray people off the street? Well… Originally, in Intrepid, that’s what the cast of characters looked like. It was just too much, and it was overwhelming from the start. Writing Vagabond taught me that characters needed to be layered in. Too many introduced from the start is overwhelming to the senses and makes any sane person want to slam the book down (or throw it at a wall).

However, I had a couple major problems with this realization:
1) I had characters that were woven in already. They’d intertwined into each other, doing various jobs in the story. How did I extract one without collapsing an entire plot line?
2) I’d fallen in love with some of the characters I would later deem unnecessary. How could I “kill” them off?

There weren’t easy solutions to either issue, but these were the ones I came up with:

The Managerial Complex- On How to Fire a Good Friend
All characters have jobs to do within a story. In fact, they have very specific jobs, and from the business side of things, if a job is not being done efficiently, we find someone else to do it. Some of my characters only had one job to do, and they often did it half-heartedly. It wasn’t always their fault. They wanted more responsibility, and there just wasn’t room within the plot.

With Intrepid, I had to learn how to consolidate roles. If a character was only doing one or two jobs (or serving one minor purpose), they had to go. Then, these jobs were granted to other characters. From the managerial standpoint, it was like re-delegating work after an employee quit and the big bosses refused to let you higher a replacement. At first, it seemed like other characters were overworked, but they adjusted and took on new aspects of their role happily.

I thought this would make the editing process unbearably messy. However, it is actually making it easier. There is less pressure to fit in someone where they shouldn’t be. For example, we’ve all been to that party where someone’s ex-boyfriend shows up because he has mutual friends. There ends up being this hovering sense of tension within the entire room until he makes an exit. That’s how it felt with removing a few characters from Intrepid. True, some of my favorite scenes are shifting, but they are better. They are better because my other characters had room to breathe and grow into themselves. Some of the characters who felt deflated suddenly became more dynamic.

It’s hard to cut characters when you’ve worked so closely with them over the course of a novel. However, efficiency in characters is just as important as the conflicts they encounter. I had to take my love for a character out of the decision, because as much as I loved a character, it didn’t mean they were good for my story.

On the Preservation of a Loved One
So. The decisions have been made. There are characters that have to kick the bucket. How do I let them go?

The truth is, I may not have to— not completely anyways.

Like all people, characters have talents, and perhaps the talents of the ones I cut loose this time will come in handy later. The beauty of being a writer is that there will always be stories for me to tell, and I have so many projects already brewing in my head. Two of the characters I am cutting from Intrepid are waiting to fill roles elsewhere. I know just the story they will fit into, and I’m so excited for them. Unlike their role in Intrepid, I’ll be able to flush them out in a different way. They too, will get better breathing room elsewhere and more opportunities to shine.

Like after all breakups, initially things are hard, but eventually, it’s clear that things were broken within the relationship. Eventually we all find someone or some place that’s the right fit, and this is the fate for some of my favorite characters. The solution I could be content with was knowing there was a better story out there for the character I let go. Intrepid wasn’t a good fit for them, but the right story for them is waiting to be written. 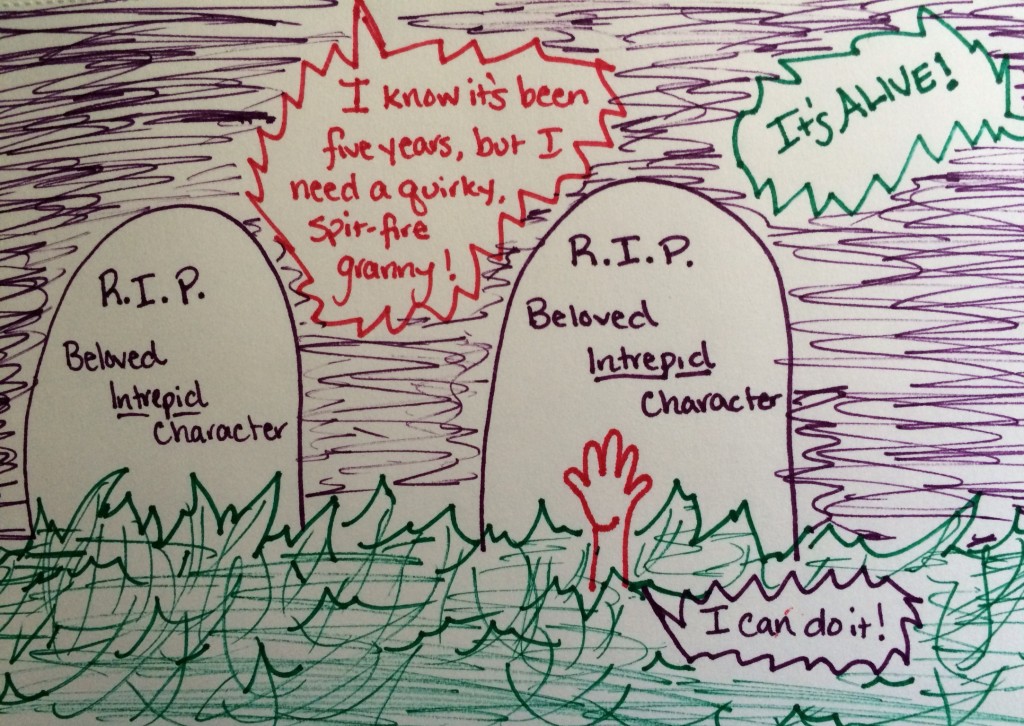