Disclaimer: This post is a little dated given that I wrote it last week before being confined to bedrest, but I still wanted to share it.

This week, I did not wear pregnancy well. I guess it all started with my blotchy, sick face. Redder than normal cheeks. Coughing fits that happened at inappropriate times—especially when someone made me laugh.

After being in bed four days straight with a chest cold, I returned to the classroom a little too early. Grades were due, standardized tests were nigh, and I had responsibilities. However, teaching all day took its toll. Somewhere along the way, I pinched a nerve in my back. I think it may have happened when I was carrying a stack of copies I had to run. Of course, on the day I needed to play catch up, there was only one copy machine working in the entire school—far away from my classroom, obviously. So there I was, six at night, trying to carry 415 Common Assessments for my team and my satchel back to the 8th-grade hallway.

Luckily, another teacher happened to be there.

Luckily, she gave me the what the heck do you think you’re doing face.

Luckily, she offered to carry them.

Still, the damage was done.

My waddle turned into a hobble. It shot up and down my back, into my leg, down to my toes.

Only on the left side, though.

And when I went to get dinner with my husband, Taylor, and our friend, Jack, every step I took sent jagged little ticks through my spine. Jack, of course, reminded me that I could, “lose a few pounds, and the problem would be solved.” I immediately broke into laughter, which led into a coughing fit, which hurt the spine more…

I am getting unavoidably big—which I strangely love. I guess it’s because I know this kid is getting big, and I love that I’ll get to meet him or her on the other side of this summer. I also love that, when I walk, my stomach has its own swagger, like a pendulum swinging in the opposite direction of my hips. I technically follow my stomach around all day. It proceeds me wherever I go, and more often than not, it leads me to food. 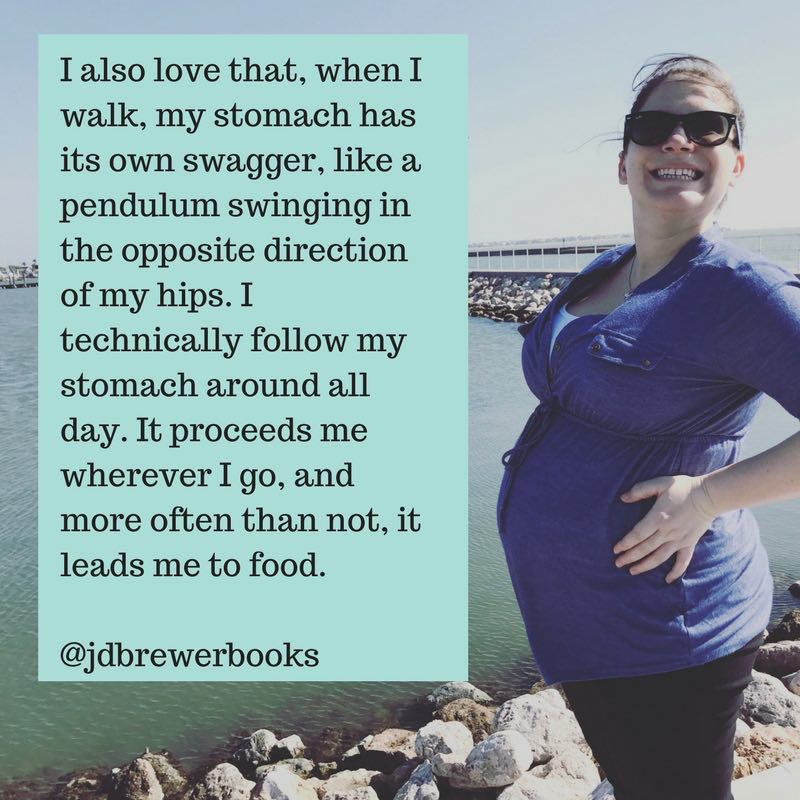 After dinner that night, we ran to the store to make sure I had a proper lunch for the next day. While Taylor was distracted in the cereal aisle, I decided I wanted a banana or a peach, and I hobbled into the miasma of produce shoppers. I was oblivious to everything but fruit, and people made way for the pregnant lady, halting shopping carts, parting the Red Sea towards the tomatoes, noting the determined look on my face for food.

I left the scene of the fruit-nabbing, one peach in hand.

It was a not-so-quick, woman-on-a-mission kind of job.

On days like those, there’s not much to do but laugh at myself—perhaps even forgive myself—because nothing about my existence is graceful right now.

For example, when we got home, there was the struggle to remove my shoes from my ever-swelling feet, the arduous moment I had to reach down for the dog-food bowls, the awkward event called stepping up into a shower, and all those little tasks that I’d always taken for granted before.

There have been complete moments throughout this pregnancy where I’ve learned that my body has not been my own. In the beginning, it was the mood swings. I tried (and often failed) to be patient with 163 8th graders. Instead, they became patient with me. We had a rough spot for a few months when I was trying to grasp the whole growing a person concept. People kept trying to remind me that my emotions weren’t my own, which I realized wasn’t completely true. They were my emotions, but control over them became an act of will. As a teacher, this did not make my job easy. I mean, mix in an emotionally charged pregnant woman with 163 emotionally driven teenagers. You bet your bunnies there was some comical clash of the Titans. Things I would never have been baited into before hooked me and all my teaching experience on how to deal with a snarky student flew out the window.

Those months were not my shiniest teacher months.

I have learned to forgive myself, and I think my students have forgiven me, too.

The other thing no one explained? Being hungry but not hungry. There’s this conundrum of needing to feed this child even if your brain and heart are not in it. The moment this happens, you want and do not want food, and choosing what to eat becomes frustrating—especially for Taylor who has to battle through this bog of unknowing. How could he have foreseen my inexplicable disgust for chicken? Or the fact that sometimes a girl just wants chocolate cake at ten at night?

To top it off there are other food facts I had to learn. It wasn’t just caffeine and wine I had to cut out. There was a whole slew of foods I couldn’t eat, and finding the answers to the yes-and-no food list was a contradictory mess. Google is not your friend here.

Still, I never thought that, in a thousand years, I’d have to give up a good deli-sandwich during my pregnancy, but good-golly! Before Spring Break, some students ate lunch with me to watch Ender’s Game, and of course, there was a boy who brought in a standard ham-n-cheese on white bread every day. I joked with him that he was torturing me, but if that kid only knew!  I want me a ham-n-cheese sandwich! Stat.

Seriously, though. There have been a million moments of shock at the things I’m not allowed to eat. Feta cheese. Sprouts. Sushi.

(Okay, maybe I knew I’d have to cut that last one out of my diet, but I can still be bitter.)

And don’t get me started on the fact that I already had the world’s smallest bladder. Clockwork has taken on a new meaning. It’s like my bladder has its own hour hand, and if I don’t get a three-minute break at just the right time, the wrath of a baby pressing on organs becomes excruciating. This situation was not made easy by the fact that my schedule goes from 1st to 6th period with only a lunch break in between and leaving students unattended is not allowed. Figuring out the bathroom break situation became quite the fight.

Then there were the times I encountered heat exhaustion and dehydration. It didn’t help that my classroom is the last one in the hallway so that when the air conditioners break, they break hard in my world. Add in a small room full of breathing bodies and slow moving fans on a warmer than warm Texas day?

There are also the stressors that go beyond bodily needs. I feel like they are different for each soon-to-be parent, but there’s an empathetic link that makes them all universal. While my husband and I explore a lot of these questions, we keep landing on the same realization that we have no clue what to do.

Cluelessness has become a constant source of anxiety for us both. The only thing we keep landing on is that we want to create an adventurous world for our kid. The how part is just impossible to see right now.

Every day, I learn something knew about my child. Like right now, as I write this, it is having a dance party in my stomach. Apparently, it’s learning how to move, and I have a feeling that now it has figured that part out, it’ll never stop. We’ll be chasing this kid up and down grocery store aisles, hiking trails, and hallways, and Taylor and I will have our work cut out for us. After all, it is our kid, and we were both handfuls from the moment we were born.

And every day, I learn something new about being a mother, like the realization that motherhood doesn’t start after the baby is born. For some, it begins long before the child even exists because, from the moment you realize you want a kid, you begin planting dreams and growing hopes. Those dreams and hopes become real the instant you discover the kid’s existence. Then the real becomes a reality the first time you feel your child move. Yet you’ve been a mother all along—just at the not-so-obvious stages of motherhood.

And at one frantic point, all of this shifts. There’s this moment, you see, where you recognize that you are irrevocably in love. You would have thought it’d be an obvious love, but you’ve been too distracted by all the weird shit your body is doing. Then, inside all of that chaos, the baby starts stretching, and you place your hand on your stomach, and you realize that there’s a whole other human being in there! I guess learning that your body is not your own is just the first step. Once you got that part figured out, you also realize that your heart is no longer your own.

My kid has stolen my heart, and I’m not inclined to get it back anytime soon. 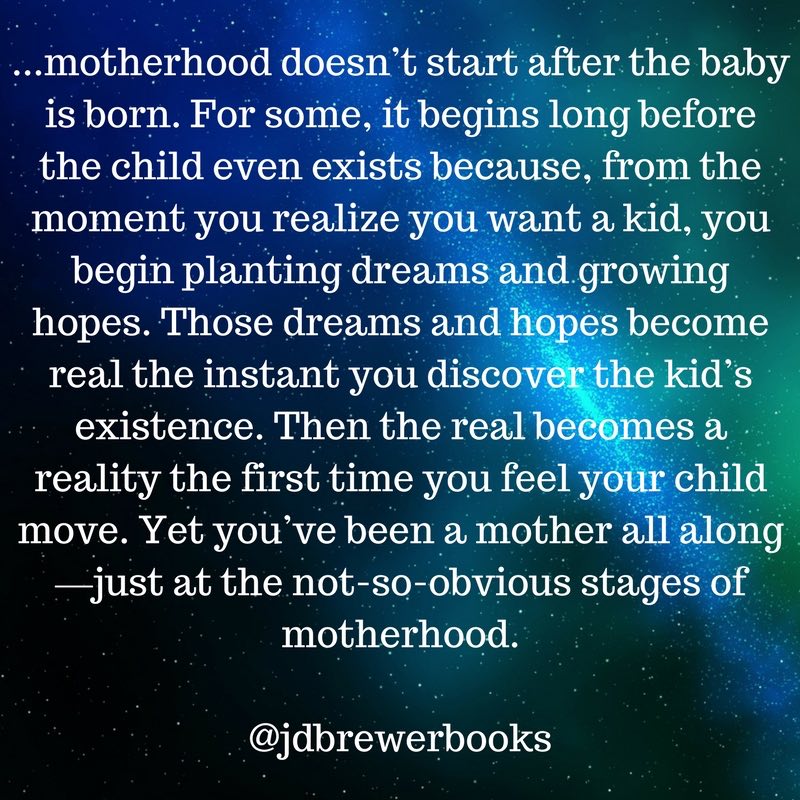 Song of the Week

Kings and Queens and Vagabonds by ELLEM