I feel like the writing world needs to pull an idea off the table of expectation and reevaluate it. It’s this idea that there is the right way and a wrong way to write or get something published. I think that’s the thing that cripples people when they want to be writers. They become so concerned about how others are doing it, that they forget to actually try and see what works for themselves. Before they’ve even written a novel, they give up on the basis of the overwhelming white noise. And by “they,” I mean me two years ago… three years ago… ten years ago…

What makes things difficult lies in the fact that the writing community is just as polarized as the rest of the world. We face these polarizing choices on a daily basis, and the questions plague us with a viral distraction: Independent or traditional publishing? Outline or run harry-carry on that manuscript? Is Goodreads or Facebook more appropriate to advertise on? Do “real” writers need NaNoWriMo? M.F.A. or the school of life? Get an agent or be a lone ranger? Over and over again, we are asked to pick a side of the fence to land on, dig in our heels, and say, “I am right.” I guess it’s because, for most of us, it took a lot of courage to pick any path concerning writing in the first place, so of course we need to believe that we chose right for ourselves.

But my writing career is far too young for me to believe wholeheartedly with any side of this dichotomy laden fence line. I love the novels I’ve come up with, the characters I spend my days with, and the worlds I get to step in and out of, but most of what I’ve written reminds me of my first two years of teaching. It’s full of heart and raw talent, but I know my skills are only going to mature from here. I’m constantly looking over feedback and trying to adjust to be better because that’s what usually works for me. However, I recognize that I am barely learning the ropes in terms of publishing. It’s been a solid year and a half of me clawing my way through “the questions”, but I have to admit that despite my choices I’m not entirely sure I have the answers.

The truth is, the only answer I feel to be honest right now, is that there is no right or wrong way to get your work out into the world just like there’s no right or wrong way to write a story. After all, right and wrong is all relative, personal, and in flux when it comes to publishing. However, there is one thing that remains true: dreamers dream and writers write, but the great writers are the dreamers who force themselves to write. And then I think of all the dreamers who never get to the writing part! It breaks my heart to know there are epic stories out there that will never be told.

I jokingly told someone this past week that I often have no idea what I’m doing, but I’m doing it anyways.

And I think that last part of the equation is what’s important for any writer.

I might find a better way to do something later or I might discover I’ve been waisting my time, but I’m not giving up on it. I call this the Rubik’s Cube Complex because for me, every time an answer looks clear, I realize that the next move I make only jumbles the colors back up. 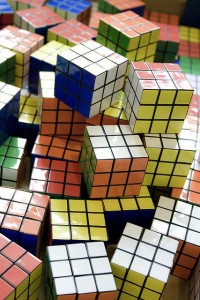 And boy are there color jumbling things EVERYWHERE.

I read a blog about how many books Amazon actually publishes every day, and I freeze up with fear over the competition. Then I read a success story about how an independent author got her books out to millions, and I fill up with hope. I hear about another social media site that’s getting popular, and I wonder how I’m ever going to manage an author’s profile for that (because I’m barely learning how to use Twitter)! Then I have a conversation with a fellow independent author about how excited we are about the projects we are working on, and I am reminded of the joy in my work. The next day, I get a student loan bill in the mail… and you get the picture—or the jumbled, colorfully, blocked picture of the puzzle that refuses to be solved.

All of these things are colorful. Colorful emotions tied to colorful reactions because of very colorful fears.

So when I get trapped in the Rubik’s Cube Complex, I’m reminded of a Jamiroquai song, “Canned Heat (Just Dance).” Except, instead of just dancing, I turn back to what should be at the core of the spinning machine—just writing. It’s the only answer that makes sense to me when I get confused.

However you decide to approach it. Just. Write.

However loud the white noise is around you. Just. Write.

However many choices there are to confuse you. Just. Write.

However many neigh-sayers you encounter. Just. Write.

And whenever someone who took a different path raises their eyebrows in your direction because they are right and you are so foolishly wrong. Just smile. And write.

As the writing comes, it will allow you to twist your own Rubik’s Cube around its spinning core, and eventually the colorful blocks will line up for you. It may not look like everyone else’s and it might take longer for you to figure it out, but you might just enjoy the way all the colorful colors collide. Hell, you might just figure out all the tricks so you can enter one of those Rubik’s Cube competitions because you know how to screw it all up and fix it faster than anyone can blink. The only thing that truly matters in the writing world is that you are not one of those people who sets the damn Rubik’s Cube down after five minutes because it feels impossible.

In this world of rights and wrongs and all the answers in between that I could cling to as truths, I can only trust in one heavy-set belief: I am writing, and that’s what matters. And rather than focus on the right and wrong way to do things, perhaps we should focus on encouraging everyone to write in the way they see fit, then publish in the way they see fit. We should encourage each other to find joy in the twisting Rubik’s Cube that is the writing world and see how many different combinations of colors we can come up with in the process.

And on that note, I’ll leave you with a theme song to get you in the “just writing” mode.

J.D. Brewer is the author of Vagabond and Intrepid available on Amazon. (To check her novels out, click the pictures below.)

Her current work in progress is Vagabond‘s Prequel, On the Other Side of Greatness: Available Summer 2015.